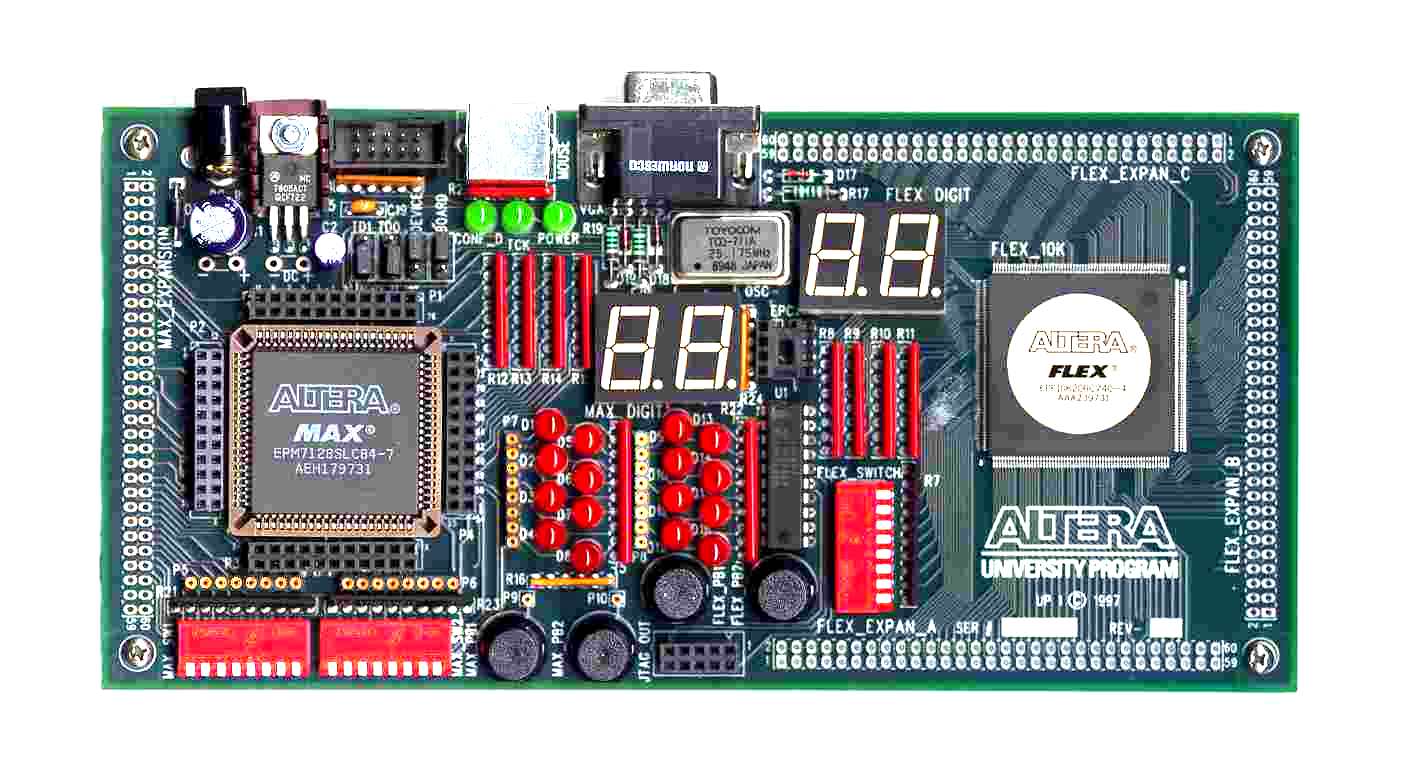 Altera's UP 1 Education Board shown to the left, contains a large CPLD, Complex Programmable Logic Device, that can be used to implement digital logic designs that contain 20,000 or fewer gates. The UP 1X and the new UP 2 boards are identical, but they contain a larger 70,000 gate CPLD.  A PC-based student version of Altera's CAD tool, MAX PLUS II,  provides support for schematic capture, VHDL based logic synthesis, logic simulation, and CPLD programming.  It is being used in the digital logic and computer architecture classes at Georgia Tech in the School of Electrical and Computer Engineering.  The design files listed here can be downloaded to this board via a PC's parallel port cable.  The UP 1 board also contains switches, LEDs, seven segment displays, a VGA connector, and a PS/2 keyboard or mouse port.  VGA Video output can be generated by hardware designs implemented on the board.  Video output directly from the CPLD was used to generate the images and movies below.
Click here for more information (PDF)

NEW!We have a new lab book from Kluwer based on Altera - Click here for more info

Georgia Tech's UP 1 and UP 2 Board Design Examples

LIFE - Implements Conway's game of life on the VGA monitor.  Runs demo with one of two initial values of life cells.Uses a 64 by 64 pixel graphics display. VHDL based.
Click here for rules and additional information on Conway's life game.Video Demo Movie (mpeg)

MIPS - Implements the MIPS RISC processor core with a VGA monitor display of major busses.  Push buttons single step and reset the processor.  Also contains an 8 by 8 character font that might be  of use for other projects needing character display. VHDL based. A newer version of this model can be found on our book's CD-ROM and is described in more detail in the last chapter. Video Demo Movie (mpeg)
Click here for instructions on running MIPS demo (PDF)
Click here for more info on the MIPS VHDL model.

LC2 - is an implementation of the LC2. The LC-2 computer is described in Introduction to Computing Systems from Bits & Gates to C & Beyond by Yale Patt and Sanjay Patel, McGraw Hill, 2001. Push buttons single step the processor and a video output of registers is generated. This web page contains links to a VHDL model of the LC-2 computer designed to work with the free Altera student edition and run on a UP 1X board (it is too large to fit on a UP 1 board)

TRAIN - A virtual model train setup with two trains, three switches, and five train sensor signals is output on a VGA monitor. Students write a simple state machine to control the trains and avoid crashes.  The student  state machine is tcontrol.vhd. VHDL based.  Ideal first VHDL state machine lab assignment, many different variations on train operation can be given as different assignments.A newer version of this model can be found on our book's CD-ROM and is described in more detail in chapter 7. Video Demo Movie (mpeg)
Click here for draft copy (PDF) of Train lab assignment

DZONE - Demonstration of our latest D-chip UP 1 graphics technology. Uses both RLE encoding and color dithering.  Programming file (sof) for download to UP 1 board. Video Demo Movie (mpeg)

MOUSE - NEW! Demonstration of PS/2 mouse with video output.  Plug in mouse and monitor, power up UP1, and then download this file.  Mouse moves cursor and buttons change cursor color.  Additional documentation with source code can be found in our lab book.  Video Demo Movie (mpeg)

Ticcer - Clone of the frogger video game with a tic and dogs instead of a frog and cars.  Runs on a 10K70 - UP1.  Video Demo Movie (mpeg)

Megatronixs Robot Vehicle. This student project uses a UP1 board running our MIPS IP core. Two Polaroid SONAR units detect walls and try to steer the vehicle. An off-the-shelf RC car base with PWM servo steering and a PWM speed control was used. Echo return signals from the SONAR generate interrupts. Movie (AVI)

These introductory digital logic labs use VHDL, the MAX chip, LEDs, and switches on the UP 1 (no video). This is a draft copy in MS Word format. Juergen developed these as a special student project at Georgia Tech.
ALU - builds a 4-bit 14 function Arithmetic Logic Unit
BUTTON - debounces the push buttons
LOCK - a combination lock state machine lab

WORM - A VGA version of the classic centipede game. A worm is moving on the screen, seeking food (green dots) and trying to avoid poisonous stuff (red dots). Two push buttons are used to navigate the worm, one turns the worm clockwise, the other counterclockwise.

SLOT- A VGA video slot machine game.  One button selects number of lines to play and the other spins. Copy of Ed's class report on his slot machine. Source files are not available.


EE4743/6743 contains some nice Altera based labs, homework, and tests developed for EE4743/6743, Digital Systems Design,  by Bob Reese at Mississippi State.  Also contains Circles a Nim variant game for the UP 1 with keyboard input and video output.


Documentation for UP 1 and MAX PLUS II Software

Patch required for older student version (not used in version 9.23) to program UP 1 board. If link is down right click here and save this driver file in your maxplus directory.

MAX PLUS Getting Started (PDF) - Tutorial on Altera Software

MVP - Georgia Tech's DOS version of Make VHDL Pretty, cleans up messy VHDL code and makes a text, html, or ps output file. VHDL keywords can be put in bold and comments in italics in the listing file.  HTML output files have colored text like the Altera editor. Type mvp without options for command line syntax.  Here is a typical command line mvp -uKF6 -S"My Subject" -N"Who am I?" my_file.vhd > outputfilename. Use "> printername" to redirect postscript output directly to a printer instead of a file.  Text output can also be produced.   Windows beta version of MVP from Scott Barnes. Latest version of MVP from Jason Trammell

A Meta Assembler for Altera Computer Design Projects - Here is a new link to the meta assembler. It can easily generate code for the example Altera UP1 based computer designs in the book (or any others) and it is pretty easy to use. You need to make a definition file that defines instruction formats and then you have an assembler that outputs object code as Altera MIF files. To make it easier you could give students the definition file for a given instruction set and they would just use it as a normal assembler. It also supports macros and produces a typical listing file. The syntax is based on an old meta assembler from the 70's. I was unable to find any meta assemblers around on the web. They were pretty popular in the 70's for bit slice when everyone made up their own instruction set and seemed to have all vanished in the 90's. Here is a format definition and assembly example for the simple computer.

Purchasing your own UP 2 Board

Altera currently sells only the new 70,000 gate UP 2 board. Contact Info for orders:


Note: Altera's discount offer is limited to students only

Here is a suggestion for a power supply, Jameco,  DV91A - DC Wall Transformer 9VDC
at 1000MA. Radio Shack also has some but be careful to get the correct voltage, current,
polarity, and a female 2.5MM x 5.5mm connector. Supplies over 9V DC and up to 12V DC
can be used but they tend to really heat up the UP 1's 5V DC on board regulator.
If you plan to use a keyboard or mouse attached to the UP 1 board a 1000 MA output
is recommended, since the UP 1 must also provide power to them.

A small heat sink for the UP 1 or 2 voltage regulator is not a bad idea. DigiKey ,  HS213
or Jameco,  158051 is small enough to fit in the tight space so that the regulator can be bent back down
on the board's surface.

A longer 25pin to 25pin PC M/F parallel cable is also useful since the byteblaster cable
is very short.  You will need all 25 wires connected in the cable. Any computer
store or electronic parts mail order catalog should have these for a few dollars.
Be sure to get a quality cable with shielding, we have had trouble with a few of the really cheap cables.